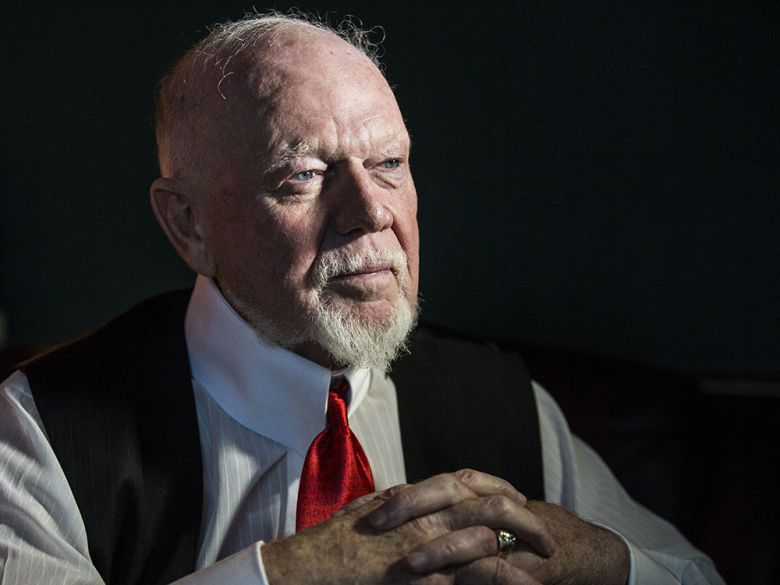 This is no country for old men.

— W.B. Yeats (who had a dream a hundred years ago, about Don Cherry and the Sportsnet weasels)

Just to set the tone here: Three cheers for Don Cherry. And as that clearly seems insufficient — three more cheers for the grand old man.

Way to go Sportsnet. It takes a lot of what Jessica Yaniv was trying to get waxed to bring the guillotine down on an 85-year-old man, to toss him out — on Remembrance Day — for delivering a passionate sermon about the wearing of a poppy on … Remembrance Day. You guys are so tough you probably have to wear helmets and shin pads in the office.

For 39 years Don Cherry has been the face, the voice, and the proudest celebrator of the country’s chosen game, and Sportsnet snaps that career shut, hurls him off air, because what I will call “the usual crowd” got all huffy and screamingly righteous over what — at worst — was an indelicate phrase that was all of two words.

There is no career in all of Canadian sports history, and there will never be another one as successful, as entertaining, as continuously animated and enthusiastic as Don Cherry’s. And this is how it ends. No testimonial dinner. No gathering of hockey heroes, old and young, to toast and roast the master communicator of the game. No TV specials to celebrate the greatest television star that purely Canadian TV has produced. He is, you know.

Instead, without so much as time to take a breath, Sportsnet gives him the boot in an (ungrammatical) three-sentence press release that should be put in a museum for its rare blend of perfect corporate sanctimony and utter cravenness. He deserved — he deserves so much better and you crowd should be ashamed of yourselves for treating Canadian hockey’s No. 1 statesman the way you have.

No need to listen to me on Don Cherry, however. Not when one of the game’s handful of absolute legends has had his say on this tawdry episode.

How fine it is, so very fine, to read of one of the gentleman heroes of the Canadian game, Bobby Orr, being so clear and straight and direct when talking of his one-time coach and forever-friend, Mr. Cherry. How fine to see a man standing up against the supercilious sneering and precious denunciations of an 85-year-old Canadian patriot, and declaring without qualification, that he — Mr. Cherry — is NOT a bigot, NOT a racist — the witchcraft accusations of our time — and to those who know him and have had the gift of his acquaintance, the actual opposite and antithesis of both of these scandalous libels.

Bobby Orr, who knows Don Cherry like no one else knows him, put the cap on the moment with this slap shot of a statement: “What they’ve done to him … is disgraceful. It really is.” Good on you, Bobby Orr. Disgraceful it was, and it is so good in these days of timorous evasiveness and sly circumlocutions that you found the right word and had no hesitation in using it. Not to mention that standing up for your buddy and mentor displays such real character, the character of standing by a friend in a hour of fury when the know-it-alls are piling on him.

Speaking of which. Up until a few days ago I had as little awareness of CTV’s “The Social” as someone living in Tibet. I know now that it is one of the yakfests that clutter the morning schedule, a clone of the excruciating U.S. headache “The View.” And based on the now infamous ignorant rant about “white” boys who were “not very nice” and often “bullies” and — this was the golden touch — “and for me Don Cherry was the walking representative of that type” — I would say that at The Social, common decency is known only as the name of a dog that visits the lobby of a building next door.

How smug what’s-her-name was, talking about “white boys” and “types” and parents who haul themselves out of bed at unearthly hours, and travel sometimes great distances to sit in bleak arenas, sipping stale coffee and munching staler doughnuts, to enable their youngsters who have the great heart-urge to learn the Canadian game.

And as she so memorably observed: Don Cherry is their type. Yes, he is their type. And that is why for nearly 40 years he has been loved by hockey dads and moms throughout the whole nation. And not incidentally he has also been the very “type” of Canadian who respects above all others those in the military, who has honoured veterans as no other, done more kind deeds out of the public eye than The Social has fashion tips and inane conversations. As between The Social and Don Cherry, it’s chickadees sneering at an eagle.

I might also mention he is a fervent Canadian patriot of the old-fashioned kind — another “type” I am sure he is absolutely proudest (prouder even than being hockey’s statesman) to be.

I’ll wind it down with the simple observation that Mr. Cherry deserves much, much better than this. There are apologies due, but not from the master of Coach’s Corner.

I’d rather walk down a dirt road on a cruel February night listening to Don Cherry telling hockey stories than spend a whole warm evening in a banquet hall with his preening detractors.