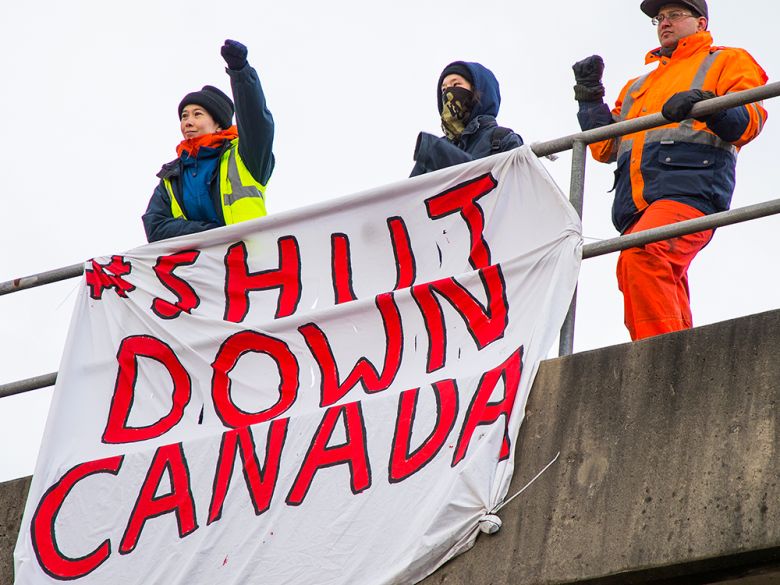 I’m familiar with absentee landlords from grade school history. The concept of an absentee prime minister is a brand new one to me.

Justin Trudeau has been a week now waltzing around Africa while, day by day back here in carbon-tax Canada, the country is seizing up. For the same past seven days apparently, Canada has been under the administration of what the media insists on calling “anti-pipeline” forces.

Anti-pipeline is far too narrow. These are the anti-industry, anti-energy, anti-Alberta, climate-change save-the-worlders who have been harassing the country for years. The difference is in the past week they’ve upped their opposition, and from one end of the country to another decided to muscle their way to a victory by a storm of blockades, protests, traffic obstruction, and in the case of Victoria, B.C., actually shutting down the people’s legislature.

These are the anti-industry, anti-energy, anti-Alberta, save-the-worlders who have been harassing the country for years

Meantime PM I’m-out-of-the-country-again sends bulletins of feeble non-assurance from sunny Senegal. And such bulletins they are. “PM urges quick resolution …” As VIA Rail shuts down, and his own deputy prime minister is denied entrance to the Halifax mayor’s office, the globe-trotter PM “urges quick resolution.”

When there is a national crisis, and there is a national crisis, to whom do we justly look for a resolution? Why the prime minister of the nation. Instead of leadership in this case however, we get a statement that surely implies he thinks the “resolution” is in some other hands. Further in the same statement — and I love this — he called for “all parties to dialogue.” Whenever in any really tense situation a politician hauls out the infinitive “to dialogue,” you may take it to the bank he has not a clue about how to handle it.

What’s “to dialogue?” Is it defying court injunctions? Is it barring your deputy prime minister from pursuing her duties? Do you want to have a chat about shutting down a provincial legislature? Bringing the commerce of a nation to a standstill by rail blockades? Threatening a great energy project that has gone through all the tests and assessments and which holds vast promise of economic benefits and jobs? Watching the police forces of the nation stand by in perfect impotence before eco-radicals? Making a joke out of the so-highly-touted rule of law while the country seizes up under pressure from zealots?

How did Canada get to this point? Easy. The elevation of the doomsday cult of global warming, the insistence that Canada has some unique and precious role in saving the planet, the hostility to the oil industry that is the logical extension of that attitude has given vast licence to anti-oil types to more or less do what they want. And now they are. The steadfast refusal to defend the industry, always bending to the other side to placate the protesters, the demonstrators; muttering on constantly about carbon dioxide “pollution;” caving in on every occasion there is an interruption in a legal development: all of these things were a bugle call to those who like to think their cause is above normal politics, above normal protest, and most of all, as we have seen this week, above the courts and the legislatures.

Environmentalists think they are a group apart. If 10 plumbers shut down a railway, or if loggers shut down the B.C. legislature, or if oil workers decided to “shut down Canada,” the RCMP and every security force in the nation would round them up, clap on the handcuffs and stow them away in a cell in a jiffy. But a few native bands, and the always available professional protesters who we have seen active since the days of the Seattle riots, decide to ride on the oil issue, and everyone in authority stands aside mute and fearful.

If 10 plumbers shut down a railway, or if loggers shut down the B.C. legislature … the RCMP would clap on the handcuffs

And our always itinerant prime minister, on another vainglorious question — this time for a useless seat on the useless UN Security Council — urges “all sides to resolve this as quickly as possible.”

Meantime we are days away from the most significant policy decision this government will make — presuming it remains the government, which in the present circumstances is an open question — the Teck oilsands mine.

Should that decision be negative, should Alberta once again be denied its right to pursue its economic interests, should a $20-billion investment be strangled in the interests of our sacred “Paris commitments,” then I fear that in at least a part of the country the protests and disruptions we have seen this week will be a timid display compared with the anger that will come out of the West.

And let me make something else clear. It is by no means only the oil industry that is paying the price for the environmental obsession of the present Liberal government. Head out West, talk to farmers, talk to loggers, talk to downtown business people, taxi-drivers, waitresses … talk to anyone. The so-called carbon tax is a bomb. It does nothing but put extra strains on everyone. Farmers can’t buy fuel to dry their grain, and save their crop, without tossing in thousands of extra dollars for the holy gods of global warming — and doing so, it should be mentioned, while temperatures are a balmy –40 and -50 degrees centigrade. It is policy as a kind of madness.

It is an old and venerable saying: they who sow the wind shall reap the whirlwind. That is so appropriate for climate-change protest politics. By insisting for their full tenure that “climate change” is “Canada’s No. 1 priority” the Liberal government has stimulated the current rage that is seizing the country.

It is an old and venerable saying: they who sow the wind shall reap the whirlwind

Climate-change radicals always think of themselves as inhabitors of a separate morality, one superior to that of the vast majority who work for a living and simply don’t have time to paint their faces every second week to stage some protest. And we’re getting a taste of what it’s like when they exercise that superior morality this week.

Mr. Trudeau should be home. I know this is an agreeable time of year to be touring Africa, but a week under the carbon-taxed skies of Alberta or Saskatchewan right now would be so much more appropriate and useful.

Oh yes, not one in a hundred Canadians, and I’m being generous, gives a damn about Canada getting a seat on the security council.