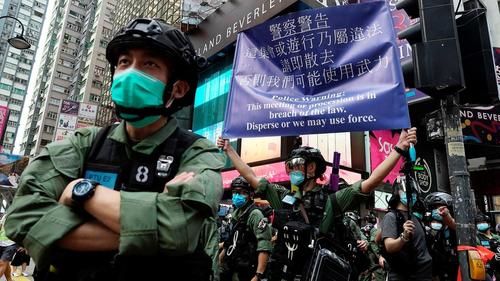 It appears Beijing and Hong Kong's pro-mainland security services have been little deterred by the recent targeted Trump administration sanctions of officials involved in enforcing the controversial national security law, designed to essentially given Hong Kong carte blanche in cracking down on local independence related activism.

This past week authorities moved for the first time to block access to a popular website used by Hong Kong-based activists. According to Reuters:

The website, HKChronicles, said it began receiving reports from Hong Kong-based users saying they were no longer able to access the site as of late Wednesday.

"After discussing and investigating with our supporters, we found that some ISPs of Hong Kong have deliberately dropped any connection to our servers, so that the user could not receive replies from our servers, resulting in an inability to access our content," chief editor Naomi Chan said in a statement.


And further, South China Morning Post is now confirming on Sunday that "Hong Kong police had invoked the city’s national security law for the first time to block HKChronicles."

"The police force had started asking ISPs to halt access, citing Article 43 of the law, the newspaper reported," Reuters continues.

The blocked access appears to have corresponded with the latest spate of arrests that shook the semi-autonomous city starting on Wednesday, wherein prominent activists like Joshua Wong reportedly had their homes raided. An American lawyer was also detained.

The timing is fascinating given what's now happening in the United States in the wake of this week's Capitol Hill chaos. Big American tech and social media companies like Google, Apple, and Facebook are acting in concert to ban not only President Trump, but also undertake a mass purge of conservative and 'alt-news' accounts.

Chinese, Russian, as well as independent media have lately called attention to the US double standard when it comes to how mass protests and the storming of government buildings are treated and presented in foreign countries vs. at home.

Hong Kongers are hailed as heroes, with Nacy Pelosi herself calling HK unrest "a beautiful sight" while pro-Trumpers on this side of the globe are condemned as "insurrectionists" and even as "domestic terrorists".

Is there any doubt that Beijing will justify its own Hong Kong web crackdown it light of the same kind of 'purge' now ongoing in North America?

Hong Kong police have yet to either confirm or deny the website blockage.

However, the irony is thick in this statement via Reuters given the current crackdown in America: "The Hong Kong and Beijing governments say it is vital to plug holes in national security defenses exposed by months of sometimes-violent anti-government and anti-China protests that rocked the global financial hub in 2019."